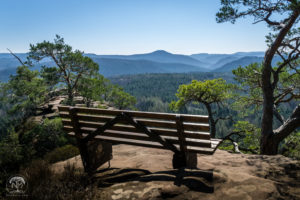 In the last few weeks I have discovered an extremely attractive outdoor, hiking and photography region: The Palatinate Forest! I have made my first trips there and am absolutely thrilled – especially since this low mountain range is only 1-2 hours away from my home.

The Palatinate Forest is one of the largest contiguous forest areas in Germany. To the southwest it merges into the French Northern Vosges. In addition to the large forest areas, the impressive red sandstone formations, as well as the many castles and castle ruins are characteristic for this area. The mountain ridges are often not covered with trees, but rocky, so that there are many viewpoints, which are excellent for landscape photography.

The castle ruin Drachenfels is a rock castle. This means that a large part of the castle was not built of stones, but was carved directly into the rock. Apart from the impressive rock formations itself, with some corridors and rooms, little of the castle itself has remained. Nevertheless, it is an extremely majestic place. Just south of the castle, on the Heidenberg mountain, a rock called Buchkammerfels stands out, from where you have a wonderful view of Drachenfels Castle.

North of Drachenfels Castle lies the Dahner Castle Group, which is definitely worth a visit. It consists of three adjacent rock castles: Altdahn, Grafendahn and Tanstein. All three castle ruins are freely accessible during the opening hours and I was surprised, how winding and numerous the corridors run in it. It’s quite possible that I missed some parts and haven’t visited them yet. Around the group of castles there are also some high rock formations that allow great photos.

Berwartstein Castle is only a few kilometres from the French border. It is also a rock castle. The special: In the middle of the system of caves, corridors and rooms within the rock, there is a well with a depth of 104 metres – all the way through the rock. Another peculiarity is that most of this castle is still inhabited today. From the southern watchtower called Klein Frankreich you have a very good view of the castle.

One of the most fascinating rock formations of the Palatinate Forest is certainly the Teufelstisch. It is a so-called mushroom rock with a height of 14 meters. A pine grows on the top of the table.

Trifels Castle is one of the most well-known and popular sights of the Palatinate Forest. The famous King Richard the Lionheart was captured in 1192 on his return from the Third Crusade and was kept prisoner there. The interior of the castle is impressive. But the rocks and castles in the immediate surroundings are also spectacular and offer great views.

I have only visited a few places in the Palatinate Forest and am already completely enthusiastic. I have noted many other destinations in this region for future visits and am looking forward to new impressions, photos and adventures.