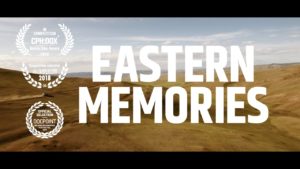 Since I saw the short film Nobody’s River at the European Outdoor Film Tour 2014, I feel a great interest for Mongolia. In this film four women from the USA went on a two-month kayak tour on the river Amur. This river rises in the east of Mongolia and flows for thousands of kilometers to the Pacific – as a border river between Russia and China. Yesterday I saw another film about Mongolia and my interest was fueled further: Eastern Memories.

Eastern Memories was shown at the Filmfestival Mannheim-Heidelberg. The film tells the story of the Finnish diplomat and linguist Gustaf John Ramstedt, who travels to Mongolia at the beginning of the 20th century to explore the Mongolian language. He travels the country for years, collecting stories and tales from the nomads. He also gets to know the (religious) leaders of the Buddhist country and makes friends with them.

Unfortunately, Ramstedt is increasingly drawn into political conflicts in the course of his work. Mongolia was then dependent on China. In order to support the struggle for independence, Ramstedt mediated the help of Finland, Russia, Japan and some European countries. His real passion for researching languages faded more and more into the background.

While the film Eastern Memories recites from Ramstedt’s travelogues, it contrasts these impressions from 100 years ago with images of contemporary Mongolia and modern Japan. While rural Mongolia doesn’t seem to have changed too much, the colorful neon hustle and bustle of the Japanese metropolises seems to come from another planet.

You can’t own a Land

One of the most valuable parts of the film for me is a quote from Ramstedts’ travelogues. He is asked by the Mongolians: “How can you buy land if you can’t take it with you?” – “By having a document about the property”, Ramstedt replied. “Then you can own the moon”, they laughed at it. “People do not own the land, if anything, the land owns its people”. This statement will continue to have an effect on me for a long time, because I have often asked myself whether I would rather be Argentinean or German. Maybe it’s not so much my power of decision… A really great film!